Security in Android: How to build a safe application 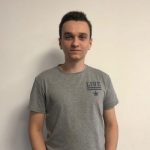 How can we build a safe application then?

Well, we can at least try.

Just imagine: about 70% of mobile users choose Android devices over iOS, even though iOS devices are considered more protected from hackers.

On Android, users can take care of their own mobile security to some extent, with 2FA, VPN, biometric authentication, and wise permission management. But we, as Android developers, want to deliver as much protection as possible.

In this article, we talk about what security means, where to look for security vulnerabilities, and how to implement some best practices to protect against them.

However, first things first — how do we define security?

Security is a system state where external and internal factors have no negative impact on the system operation.

In plain words, it’s a safe condition where your system or application isn’t at risk and can run seamlessly.

But the thing is, no Android app can be totally secure for four main reasons:

These factors put users’ data at risk, including banking, electronic health information, email and messages, insurance, and other aspects of daily life.

To help you make your applications safe, we’ve listed the most critical vulnerabilities to keep an eye on.

Weak authentication is one of the trickiest issues. Although users partially control the user authentication process, it’s the developer’s responsibility to make authentication easy and smooth to minimize the number of users who will try to bypass secure sign-ins. Key exchange and authenticating legitimate requests from apps to the back-end are also processes you need to protect against leakage to prevent attacks.

An unprotected data transfer layer leaves open the potential to steal data. Attackers can intercept data during communication between the app and the back end . In this case, a third party can successfully perform hijack request and gain access to the server-side information.

Unsecured native code puts data obtained through a network or via interprocess communications (IPCs) at risk. This can cause buffer overflows and logic errors (e.g., off-by-one errors). Using the Android NDK instead of Android SDK, in general, compromises safety. If you prefer the Android NDK, at least obfuscate the code.

External storage without cryptographic verification leaves the storage device vulnerable to data theft by intruders who can attempt to read and write over the stored data. As a result, it exposes the stored data to attackers.

And that’s just a partial list. We didn’t bring up other careless practices in security in Android, like session mishandling, poor management of access permission requests, and skipping app data containerization. Most probably, that’s because those are the rule of thumb, and that doesn’t mean you can ignore them.

Now, let’s go to what you’re all here for — techniques to make your Android apps more secure. Let’s examine them one by one, without a hurry.

There are different ways of attacking apps. We’ll skip the most obvious attacks, like retrieving images, fonts, texts, and animations, and jump right into a more damaging attack: web traffic interception.

An online shopping app is a good example. Nefarious parties can potentially attack them, retrieve their network transmissions and obtain information that lets them create a price comparator app.

Or, web traffic can transfer private keys (e.g., for a paid service that attackers would like to use free) and try to retrieve them from an app. Attackers may try to retrieve them during transfer. Whether the keys are encrypted or unencrypted, intruders can potentially benefit from them.

So the web traffic is our first stop, and let’s look at how to secure it. 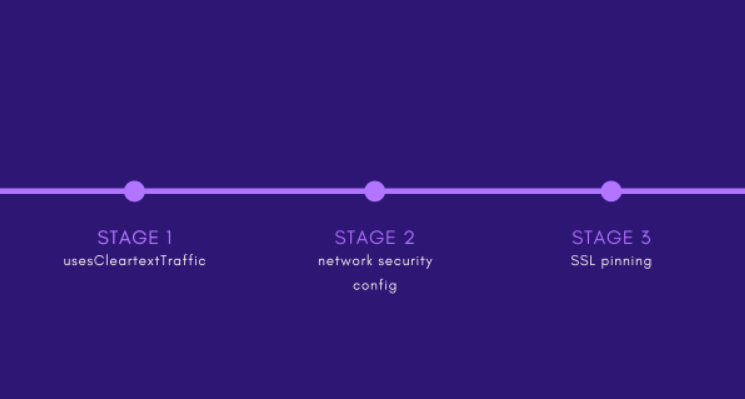 Every Android app includes an AndroidManifest.xml file where we, developers, define permissions that an app can ask a user for, screens an app contains, and other app components.

The picture below reflects part of a generic app description, where android:usesCleartextTraffic=“true” means that we entrust the in-app traffic (both HTTPS and HTTP) entirely to the network.

Programs like Proxyman and Charles allow attackers to intercept app traffic and read anything the app sends to the back-end. These programs usually install a certificate on an Android device, allowing an attacker to intercept an app’s web traffic.

The picture below shows the networkSecurityConfig description in the <application> field of an AndroidManifest.xml file. 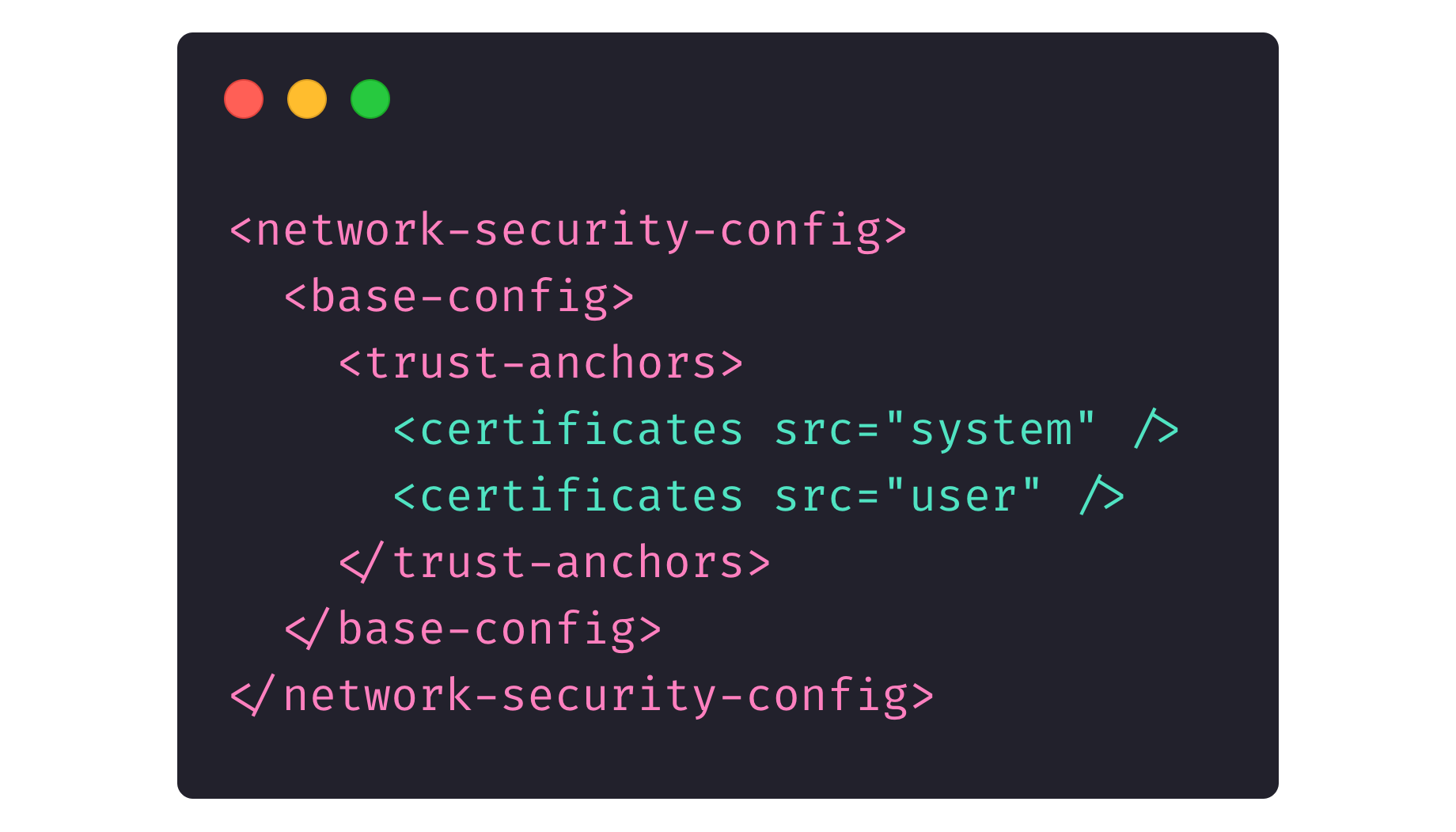 At this stage, we indicate that the beck end only trust specific certificates and nothing more. This protects us from man-in-the-middle (MITM) attacks (i.e., for example, when an intruder intercepts traffic at the router level, modifies it, and transmits it to the app).

The first method is the code in OkHttpClient, which is, in fact, our intermediary to the in-app web traffic.

The second one is the same networkSecurityConfig that we used in Stage 2 to indicate the trusted certificates.

Unless you live under a rock, you know how important it is to hide an app’s data from evil eyes.

Every app has a cache, local files, and other ways of storing data. Uninstalling an app either deletes those caches and files with the app or they stay on the device (for instance, if a user plans to install the app again and wants to keep the cached files, like pictures, audio, video, or a contact list from the previous installation). Users indicate in the relevant field whether they want to keep the cache or delete it after the app is removed.

Developers also include a field for users to indicate which particular files they want (or don’t want) to keep after the app is uninstalled. This configuration is obligatory for Android 12 and later versions.

It’s also worth mentioning Android Debug Bridge, or adb. This Android system feature allows users to upload the app’s cache to their PC. This way, when a user chooses not to save the app cache to their PC, they’re protected from attackers who attempt to retrieve it through adb.

If an app has root permission on a device, the attackers can retrieve files from other apps via adb. Finance-related apps generally don’t work on a device if it has root rights. Particular plugins can hide whether an application has root rights, and there are some methods to unveil that information. But that’s a story for another time.

You probably already know that API keys must also be stored and used correctly. Let’s compare a few approaches to maintaining them.

Database security and its algorithm

First, decide whether database security is critical for you, and if your answer is yes, you should opt for the paid SQLCipher library. It has broader functionality than the free one and it’s obfuscated so that the code is obscure, incomprehensible, and intertwined.

Let’s look at how the SQLCipher library works with an application.

First, we initialize the library.

Then, in the Gradle file (another project configuration file to attach different libraries or configure things, like the minimum Android version for app install) we tell the app to call the library.

EncryptedSharedPreferences is a file that saves data about particular app elements. It usually holds a user token and their private data, like account information, to quickly show it on-screen.

If we keep the data unencrypted, any attacker who gains access to root permissions on a user’s device can retrieve this file and read all of the user’s data. But when it’s encrypted, attackers only see a set of random letters.

First, we connect the library to the project in the Gradle file:

Then the library initializes and runs its code: 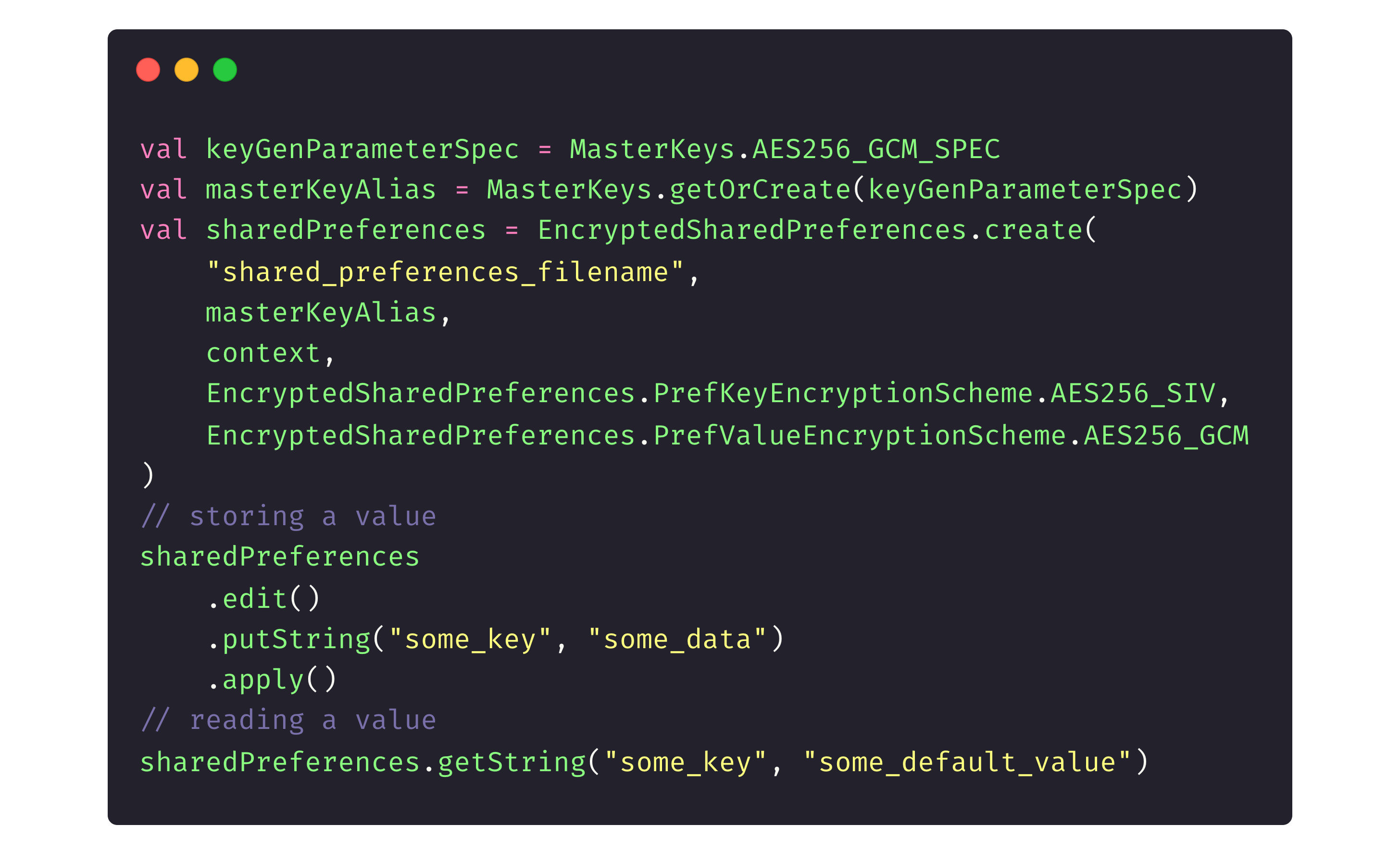 Here’s what the data files retrieved from the app look like unencrypted:

And encrypted with the library:

The EncryptedFile API, meanwhile, can be used to encrypt any file, being supported by Android 6 and later versions. This encryption tool uses the Tink library under the hood and provides custom implementations of FileInputStream and FileOutputStream.

Netflix and YouTube often use EncryptedFile to encrypt the audio and video files that users download for offline listening and watching (for premium accounts, of course). As you can see in the relevant folder, the system indicates these downloaded files as encrypted.

The Android Keystore system can serve as a container for private keys from different services. The keystore represents an extra protection level beyond the previous ones.

However, there are cases when we don’t entirely rely on private keys because we have linked the key to the SHA (secure hash algorithm) fingerprint of the security certificate.

There are two trustworthy sources that can attest to the security of your app.

An application security audit can also help ensure that an application is safe and secure. Demand creates supply, so plenty of software services are available to inspect the security in Android.

Let’s use the MobSF tool to check a banking app: 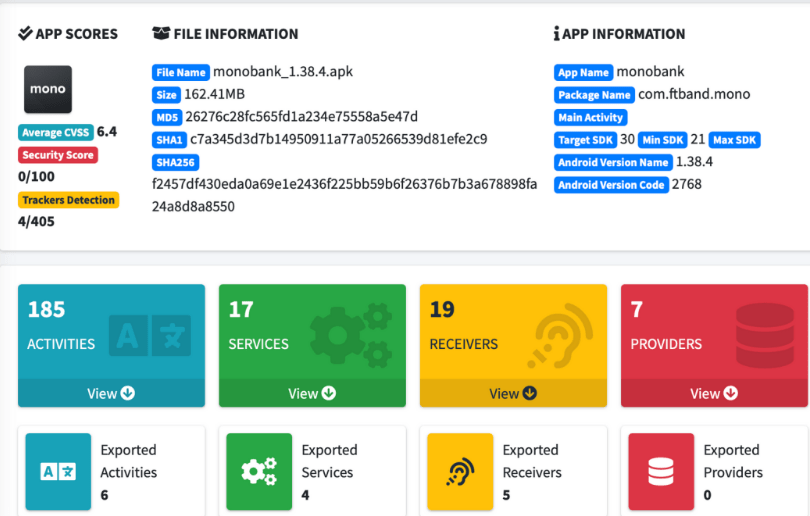 Here, one of the most critical indicators is the average CVSS, which stands for “common vulnerability scoring system.” CVSS is an open standard used for quantitative assessments of a computer system’s vulnerability, including the apps, and helps prioritize improvements. The lower the score, the better.

At the same time, MobSF might not show the CVSS score 100% accurate, because the tool only conducts static analyses. Sometimes, the tool considers factors non-secure, even though they are secure, because MobSF cannot recognize that developers have protected them.

We recommend you work with these additional tools to strengthen your apps’ security.

These are extra tools and frameworks to make the Android app almost unbreakable. 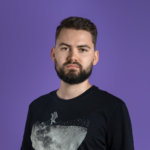 How to build Collapsing Toolbar with MotionLayout

How do you build Android MotionLayout Collapsing Toolbar? Here is a simple step-by-step guide on how to do it appropriately 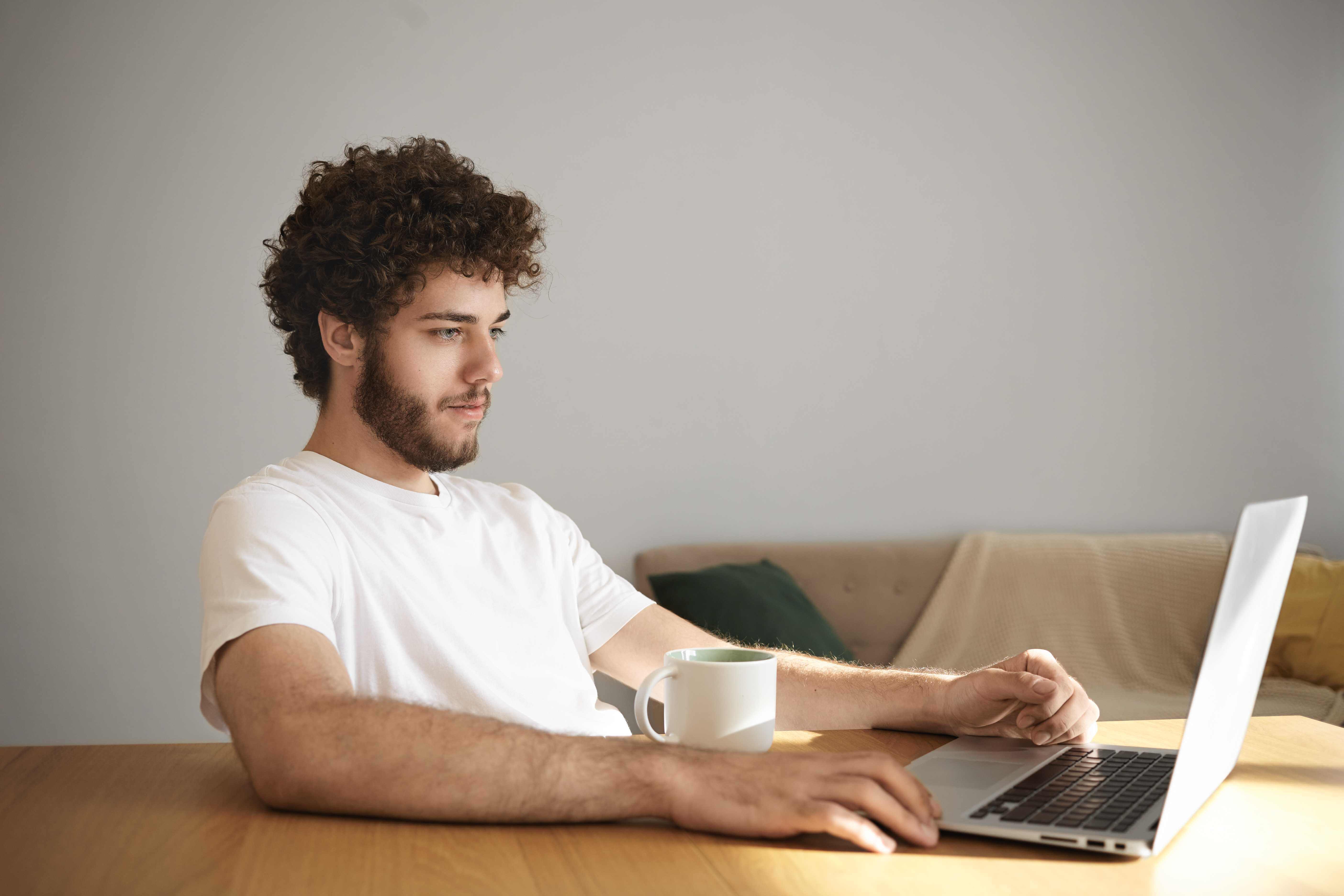 How to implement an EmptyState for RecyclerView

Implement an empty state for RecyclerView easily without redundant coding, and give your users an Android RecyclerView empty view with a more...